Sustainable business: how to become a green office

The pressure for companies to go green is growing, from both consumers and employees. Furthermore, they need to show authenticity when evolving. But how can organisations take steps to improve their green credentials, and can it benefit their business? 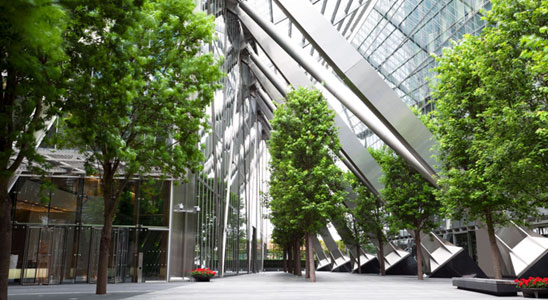 The drive towards a more sustainable, low-carbon way of life to tackle the threat of climate change continues to build momentum.

It’s something that’s underlined by green action at the highest level around the world – from the UK Government’s pledge that the country will achieve net zero greenhouse gas emissions to thousands of Chinese companies being fined for breaking strict pollution rules.

Meanwhile, the United Nations is calling on businesses – large and small – to help meet its Sustainable Development Goals by 2030.

Across all industries, companies are already responding by transforming workplaces into more sustainable environments. And while many are doing this for moral reasons, is there also a business advantage to going green?

The move towards sustainability is not just happening because it’s helping to stave off environmental catastrophe. There are sound commercial drivers too. To begin with, there’s the need every company has to avoid alienating its customers. A recent global survey by market research company Nielsen found that

81 per cent of global respondents feel strongly that companies should help improve the environment.

As well as avoiding penalties by complying with growing green legislation – the UN says there’s been a 38-fold increase in environmental laws worldwide in the past four decades – sustainability can have a real impact on a company’s bottom line by cutting costs in the workplace through different approaches to energy use, recycling and water and waste management.

The Carbon Trust points to energy in particular as one of the largest controllable overheads in any workplace. Less energy use means savings, and the environment will benefit from reductions in carbon emissions.

It’s a point demonstrated in Australia, where the government-mandated National Australian Built Environment Rating System works to encourage improvements to the sustainability credentials of businesses and workplaces. Since the programme’s inception 20 years ago, it has helped to save 826,578 tonnes of CO2 emissions – enough to power 75,200 homes for one year.

Will Richardson, MD of environmental management consultancy Green Element, cites an example of how improvements to one company’s energy use and waste processes led to cost savings of £50,000. A system of rolling targets has now been embedded to ensure the company “stays on track and maintains its sustainability as a business for years to come”.

Our surroundings can also have a big impact on the way we feel and the way we perform. Most of us spend a huge slice of our waking hours at our place of work – for the average American, it’s 90,000 hours over their lifetime. So, can sustainability at work improve staff performance?

Biophilic design – bringing greenery into the workplace to help people feel more connected with the natural environment – has been shown to improve employees’ wellbeing and productivity.

And using natural light in the office rather than relying too heavily on artificial lighting not only cuts power consumption but can also be beneficial to staff. A study carried out at Cornell University reported an 84 per cent drop in symptoms of eyestrain, headaches and blurred vision symptoms in daylit office environments. Report author Professor Alan Hedge believes optimising natural light in workplaces “significantly improves health and wellness among workers, leading to gains in productivity”.

While there are health benefits, potential employees also have moral concerns about how green an organisation is. According to the Deloitte Millennial Survey 2019, which questioned millennials around the world, climate change and protecting the environment is their top concern. Furthermore, 42 per cent of survey respondents say they have “begun or deepened” their consumer relationship with a company because they perceive a company’s products or services to have a positive impact on society and/or the environment.

With that being the case, pursuing eco-friendly policies is likely to become a must-have in a company’s recruitment pitch. Deloitte’s findings suggest younger workers are looking for more than just good pay, and “show deeper loyalty to employers who boldly tackle the issues that resonate with them most, such as protecting the environment”.

Evgenia Malakhova, Internal Communication Manager for pharmaceutical company Petrovax in Russia, agrees. “Going green can certainly attract talent, especially in younger generations,” she says. “When they compare a company that has a consistent concept of corporate social responsibility with one that doesn’t, choosing who to work for is an easy decision.”

The evidence, then, points to employers needing to make sure their company is moving with the times and accommodating the needs of the modern workforce. This can help them avoid missing out on recruiting key talent.

While attempts to implement sustainability in the workplace have many positives, companies must be careful not to leave themselves vulnerable to accusations of so-called greenwashing – where businesses are shown to have overstated their green credentials. Those that make false claims risk losing credibility with consumers, employees and investors. Authenticity is key when making changes.

Richardson says: “Carbon offsetting enables companies to buy carbon credits and be deemed ‘carbon neutral’ without having to actually stop emitting carbon dioxide, but does this make a company truly sustainable?

“If the company has worked hard to reduce carbon emissions, but needs help in becoming completely carbon neutral, then supporting reforestation and other carbon offsetting projects may be considered no bad thing.

“However, if the company simply throws money at carbon offsetting and doesn’t try to change its operations to become a sustainable business, then what is the use of that? Whatever sustainability initiatives a company implements, it should be authentic and not just a PR stunt.”

The most serious examples of greenwashing can do tremendous damage to a company’s reputation and even result in criminal charges: the fallout from the discovery that German car maker Volkswagen made false claims about some of its vehicles meeting pollution standards rumbles on, with former company boss Rupert Stadler being charged with fraud.

Malakhova says that being open about how much you can do is important. “In the pharmaceutical industry, being sustainable aligns with quality and responsibility standards needed in our production,” she explains.

“Our employees feel that they participate in the creation of valuable products, but at the same time they know that any type of production can have a bad effect on nature.”

Ever since the world’s largest conservation organisation, the WWF (the World Wide Fund
for Nature), committed to making its new UK headquarters as sustainable as possible, it has attracted interest from outside organisations wanting tips on how they can follow suit.

WWF’s Living Planet Centre serves as an open-plan workplace for some 300 staff, as well as hosting a 150-seat conference venue and education support facilities. The £13 million, 3,600 m2 building was awarded the Building Research Establishment Environmental Assessment Method’s (BREEAM) Outstanding rating and includes a central atrium-like space that’s home to a number of trees. Carbon emissions have been cut by 25 per cent, compared with the WWF’s previous office building, and the centre produces 50 per cent of its water through rain harvesting and greywater recycling. Further sustainable initiatives include producing 20 per cent of its own electricity via solar panels and more electricity provided via ground source heat pumps.

Lauren Wiseman, WWF Environmental Manager, says: “We’ve had a lot of interest from external parties about how our sustainable technology works and if it’s commercially viable, especially as there’s now more awareness of the climate emergency and that companies need to act to tackle that. They want to know what they can put in place and we’re very happy to share details.”

She reveals the centre recycles “between 75 and 85 per cent of all waste produced in the building”. That includes paper, aluminium, card, some types of plastics, glass, textiles, electronic equipment – even sweet wrappers and crisp packets. In addition, an anaerobic digester recycles food waste and other organic matter. The roof is designed to let in as much natural light as possible, but the centre is also gradually adopting LEDs for supplemental lighting. “LEDs use 60 per cent less energy than a standard bulb,” adds Wiseman.

Besides all this, WWF has established an environmental procurement policy, expecting its suppliers to mirror its aims in pursuing eco-friendly policies, and promotes a sustainable travel policy, setting restrictions on how far staff can travel around the world.

Of course, most businesses don’t have the luxury of new, purpose-built premises and are renting their workplace. Alan Bailey of The Future Economy Group, which runs an online network for businesses to share news of eco-friendly practices and products, recommends companies engage with their landlord to take steps towards sustainability.

“Commercial property owners are expected to meet minimum environmental standards and are beginning to understand they’ll need to upgrade their buildings even more in the future,” he explains. “Property owners want to keep good tenants, so it’s often in their interest to work with you to make it more sustainable. If they won’t cooperate, when your lease is up, move to different premises or co-working spaces with better green credentials.”

Topping even the Living Planet Centre is a 40,000m2 office building in Amsterdam called The Edge. It can respond to data from 28,000 sensors that track movement, lighting levels, humidity and temperature by using resources more efficiently. When areas are not being used, heating, air conditioning and lighting can be adjusted or switched off. The environmental ratings assessment BREEAM gave The Edge a score of 98.36 per cent – one of the highest-ever sustainability scores.

No less impressive, the 50-storey Bahrain World Trade Center is the first high-rise in the world to have wind turbines in its design. The 225kW turbines feed in 11–15 per cent of the total power consumption and the building has been awarded The Arab Construction World for Sustainable Design Award.

Support from all levels

Many of the small actions in creating a culture of sustainability in the workplace – like turning off lights and computers at the end of the day, or using recycling bins – come down to the behaviour of staff, so getting employee buy-in is crucial to the success of many eco-friendly schemes.

Wiseman says the aim at the Living Planet Centre is not just about minimising its environmental impact but also about encouraging staff to live those values as well. “If employees are engaged, you find people will take ownership of the process, so our staff induction includes an introduction to our environmental management system.

“They can really get involved through volunteering to do litter picking or looking after our allotment garden, and we’ll hold the odd event focused on our environmental impact, like a competition to see which department can reduce their printing the most.”

And while offering opportunities is important, Malakhova says that support must be gained at all levels: “The support of the top management can’t be an afterthought. In our case, our CEO’s supportive, non-sceptical attitude helps a lot.

“One of the most important factors is to have an initiative group and a leader who will promote the idea of creating a green office. It is made up of colleagues from different departments who have their own ideas. A sustainable business is created for our employees and by our employees.”