Performance management is about to change

Some organisations are now adopting entirely new approaches to performance assessment that go far beyond simply scrapping the annual appraisal. 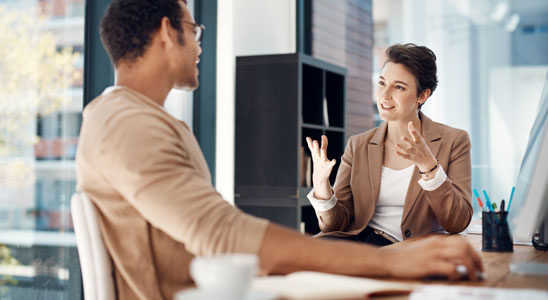 Performance management is changing. In previous issues of Hays Journal, we’ve explored how businesses were turning away from the annual appraisal in favour of more frequent feedback, but some are now considering how entirely new systems or approaches might be beneficial.

In recent years many companies — including Adobe, Accenture, Gap, Microsoft and Medtronic — have transformed their performance review processes in ways that go beyond simply getting rid of appraisals. Deloitte’s 2017 Global Human Capital Trends report found that 79 per cent of executives believed reforming performance management was a top priority.

Professor Sir Cary Cooper, President of the Chartered Institute for Personnel and Development, says: “The best way to give constructive feedback is continuously.” But he acknowledges that this should be part of a rethink of the entire process, from objective-setting and assessments to incentives and compensation.

What is behind this drive to transform performance management? Alastair Woods, a partner for reward and employment at PwC, explains that it’s partly down to the way the nature of work itself is changing.

“In the old world, you had teams working with one line manager, sitting at desks across from each other,” he says. “That model has been disrupted. We now work across teams globally, in matrix organisations, reporting on multiple projects to multiple stakeholders.”

At the same time, there has been a generational shift, with millennials beginning to affect the management science of the future. Woods adds: “They have grown up with instant feedback and recognition from social media platforms such as Facebook, so they tend to want more regular and open conversations about their performance.”

He believes this in itself requires a change in performance management. “Measuring performance, providing feedback and setting goals is much harder,” he says. “It requires constant communication in real time with several managers, which cannot be done in one year-end appraisal.”

The Deloitte Millennial Survey 2018 backs this up. One-third of millennials believe improving staff skills should be a business priority — more than the proportion who believe profit is important. Similarly, the Hays What Workers Want Report 2018 found that 39 per cent of employees of all ages would decline a job that did not offer professional development. With millennials now occupying a swelling number of leadership posts, their influence on the future of performance management is unquestionable. So what should this new process look like?

Global networking company Cisco has used technology to transform performance management, ditching annual appraisals and ratings in 2018. Jennifer Scherler-Gormley, HR lead for the UK and Ireland, explains that they disenfranchised a great proportion of the workforce. “Ratings stuck a label on someone for a year, regardless of how much their performance increased, or decreased, in the 12 months,” she says.

"LEADERS AND EMPLOYEES WHO REGULARLY CHECK IN WITH EACH OTHER HAVE DEMONSTRABLY HIGHER LEVELS OF ENGAGEMENT" - Jennifer Scherler-Gormley, Cisco

A digital platform now enables weekly feedback on the performance of Cisco’s 74,000 employees — including managers — to be provided. They answer set questions, which take just a few minutes, via Cisco’s own video conferencing system, an online chatroom or in person. Objectives are provided continuously instead of yearly. The increase in quantity of data — such as what workers loved or loathed about their week, and whether they feel they added value to a project — has helped Cisco identify high-performing teams, whose success can then be emulated across the company, which operates in 96 countries.

“Leaders and employees who regularly check in with each other have demonstrably higher levels of engagement than those who don’t, because they are more motivated and better understand their goals,” explains Scherler-Gormley, citing internal surveys.

As employees are more engaged, they are also more likely to stay for the long term; Cisco’s retention rate has improved since 2015, partly as a result of the new performance management system. “When we talk to potential recruits, our performance management is something they find attractive” says Scherler-Gormley. “It’s a differentiator. It helps us attract people.”

So how can businesses focus on the quality rather than the quantity of performance data?

Tom Loeffert, HR Director for EMEA at SAP Concur, believes data collected for performance management must be specific to employees’ roles; for example, revenue in the case of sales staff. At SAP Concur, this enables tailored career development plans to be put in place. “They can help employees maximise individual strengths, which can drive higher performance, rather than providing feedback with no practical application,” Loeffert says.

Richer data sets can also be used to change the way we deal with poor performance. At Hootsuite, the social media management company, there has been a concerted effort to spot lower performers and course-correct more quickly.

Matthew Handford, Senior Vice President of People, says: “With our new performance management system — having weekly or bi-weekly conversations — it’s a lot clearer when you are performing and when you’re not. The in-the-moment feedback levels are higher.” Hootsuite removed employee ratings from its global performance management process in 2016, and it does not conduct annual appraisals. In addition to more frequent conversations, employees’ priorities are now updated more quickly to fit changing business needs.

The way companies have traditionally measured employee contribution is changing, too. Some organisations are aligning performance management more closely with business goals. This may mean making decisions on pay, promotion and other rewards using non-business-related metrics in addition to KPIs, for instance.

Patagonia, which sells sustainable outdoor clothing with a focus on responsible business practices, is one company that has embraced this method of allocating rewards. Evelyn Doyle, HR Director for EMEA, explains that pay is determined by factors including the impact generated by an employee’s role.

On the topic of hiring to fit she says: “We believe that a candidate can be the best in their field, but it’s never going to work if they don’t match our culture,” which is focused partly on using business to solve environmental problems. “Therefore, we place a high value on how people embody the spirit of Patagonia.”

Scherler-Gormley at Cisco believes we should remove some subjectivity from the reward allocation process.

She explains that the company’s managers now make decisions on bonuses using more recent performance data, rather than pay ranges being determined by often outdated annual ratings. “This can lead to more objective and fair decision-making,” she says.

However, one barrier to Cisco’s transformation was leaders who were resistant to change; she says some were uneasy about the responsibility of allocating financial awards. “It isn’t for the faint-hearted,” she acknowledges, “but it has made managers more accountable to employees who are disgruntled by their bonus. Managers can’t blame the ratings any more.”

Arguably, the type of performance management model an organisation will embrace depends on its culture. For Patagonia, which has 170 employees in EMEA, the key challenge was harmonising its process across regions that sometimes use different languages and communication styles.

Doyle explains: “Employees use our performance management tool in different ways; how do we evaluate these approaches in a standardised fashion?”

It may be too early to tell, but part of the answer could lie in the data itself.

“It allows us to see how employees use the tool to connect to others. We are finding out who is seeking feedback and trying to understand what the drivers are,” she concludes.

“There is a growing desire for agility,” he says. “Although there is a trend to do away with the annual appraisal, that is far from the end of performance management reforms.”

Indeed, from fairer pay decisions based on access to new forms of data, to more frequent goal setting to change how we deal with poor performance, many companies are now rethinking feedback entirely.

We believe the right person can transform your business. Register your vacancy without any obligations.